Please take a look at this review of recent accomplishments, take the quiz, and visit the blog.

On behalf of SFMOMA, Webcor is completing the construction of the firehouse on Folsom Street between Fifth and Sixth Streets.

The new facility, designed and built to the City’s specifications, will replace Firehouse 1 on the site of the future SFMOMA Expansion.

The land swap between SFMOMA and the City went into effect in mid-February. Construction of the new museum will begin this summer.

“David is among the handful of team members whose work led to the approvals of our expansion and the firehouse. We really relied on his judgment, relationships, and experience every step of the way.”

Mayor Ed Lee and UCSF Chancellor Susan Desmond-Hellmann joined a handful of invited guests at a celebration of the 10th anniversary of the opening of Genentech Hall, the first building built in Mission Bay. The new 43-acre biomedical research campus and the Benioff Childrens Hospital (under construction) will ensure that UCSF remains one of the top spots in the world for medical advances and their applications. David Prowler was the Mayor’s Project Manager for the creation of Mission Bay.

This historic battery factory is coming back to life as the new home of Airbnb. Prowler advised the owner, SKS, on Planning approvals for the conversion.

San Francisco Chinatown: A Guide to Its History & Architecture by Philip Choy

— A close up look at how Chinatown came to be, from the birth of the City at Portsmouth Square to the “veritable fairy palaces filled with the choicest treasures of the Orient” that saved the community from relocation to Hunters Point in 1906, to the International Hotel and beyond. 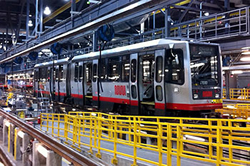 It’s a blueprint for addressing the real estate challenges confronting our transportation system:

– To meet growing demand, the passenger fleet will grow about 20% by 2030, with some vehicle types doubling;

– Some facilities are obsolete and seismically vulnerable. For example, the base for repairing overhead lines is in an 1893- era unreinforced masonry building;

In addition, SFMTA has the chance to offer selected sites for development, providing revenue to address facilities needs and to help meet City smart growth goals.

The SFMTA Board accepted the report at its meeting of January 29. No decisions have been made regarding report implemetation.

The report results from collaboration between the consultants, including Prowler Inc., Parsons Brinckerhoff, Gensler, Keyser Marston Associates, and Vital Environments and the staff of SFMTA. We held 8 workshops, toured SFMTA facilities and interviewed line staff, and conducted a survey of sister agencies to learn how they do things. We held briefings with members of the Board of Supervisors and their staffs, the SFMTA Citizens Advisory Committee, and SPUR.

Here is the link that leads to the Vision Report. Some of the key recommendations:

– Consolidating storage, paint and body repair, and the historic fleet;

– Addressing obsolescence and vulnerability of Presidio and Potrero facilities in partnership with private developers;

– Offering the Upper Yard at Balboa Station to the Mayor’s Office of Housing;

RECENT POSTS AT PROWLER BLOG
You ought to check out the blog, www.davidprowler.wordpress.com.

JK Dineen of the San Francisco Business Times posted on Facebook, “ I love David Prowler’s blog”. Posts concern urbanism and design and have recently touched on the past lives of Rockefeller Center, the surrealist architecture of Frederick J. Keisler, broken clocks, and mastodons.

1. The Moscone Convention Center has enough Wi-Fi capacity for how many mobile devices at one time:

2. Who said, “The things that spell San Francisco for me are disappearing fast” and when did he say it?

3. Americans took 10.4 billion rides on public transit in 2011. That’s a billion more than in 2000. What was the hit song in the year that had set the previous high?

5. This was the original Fillmore Ballroom, where Bill Graham introduced the San Francisco sound to the world. What’s here now? 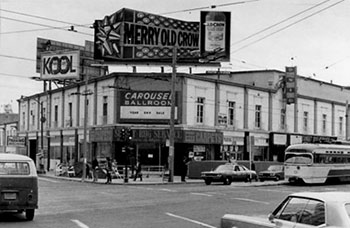 A- Families served.
B- Babie born (of which 98% were born drug-free and over 90% normal birth weight).
C- Families placed in permanent housing.
D- Clients receiving help with domestic violence.

2- B. Gavin Elster, a character in the film Vertigo, in the scene where he hires an unsuspecting Scottie Ferguson (James Stewart) to follow his wife, Madeleine Elster (Kim Novak).